The 12 Years and Under Netball School Sports Victoria country trials have been confirmed and sees five AFL Goulburn Murray Junior Netball Academy players named to go onto the final trial in Melbourne next week.

The following AFL GM Junior Netball Academy players from our region have been selected to attend the final Victorian trial along with approximately 25 other players recognised as some of the best talent from Victoria on Monday 17 June at the State Netball Centre:

Seven players made the second last stage of the SSV Country Trials and AFL GM Netball Operations Manager Peita Sleeth says “it has been fantastic to see so many of our Goulburn Murray Academy Players achieve this and be recognised as some of the best netballers in the state for their age group .”

The AFL GM Netball Academy’s Director of coaching Ann Austin and her staff have been working with the girls since March and was delighted to hear that five of their girls had made it to the final stage of the selection trials.

“The girls play a lot of netball with their weekly club/association trainings and matches, their League representations and Academy sessions this time of year,” says Ann. “A lot of hard work and dedication is required from players and their families driving all over the region to get to trainings, games and trials, so to extend to this next level at this age, is a wonderful reward.”

Six Academy players attended the final regional trials in Melbourne last Tuesday and in the AFL GM Junior Netball Academy’s first year Ann said, “I am not surprised to see some of these names returning to Melbourne next week for the final cut, our region has some wonderful talent and how thrilled we are to have our own Goulburn Murray Academy girls involved.”

The final trials next week will culminate players from both the country region as well as those from the metropolitan region to make up the final Victorian School Sport state squad.  Ann said “the depth we have in the first year of our junior netball academy is a true reflection of country netball and we wish the girls all the best in the final stage.’

The final squad will go on to represent Team Vic at the School Sports Australia, SSA Netball championships held in Canberra during September.  These championships offer gifted and talented students the opportunity to participate in higher levels of sporting competition against students from other Australian States and Territories. 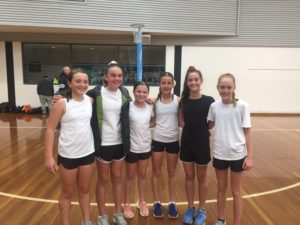